My first experience with chicken shawarma was at the Castle of Muskogee Renaissance Festival earlier this month. I was visiting the fair with my friend and her daughter, and due to allergies, we had to find food that was both egg and dairy free. Having been the last several years, we were familiar with a halal booth offering Middle Eastern cuisine. The vendor is no longer halal, as they serve pork kabobs, but the owner assured us everything was egg and dairy free.

We got the shawarma plate with pita, and hummus, and a bunch of veggies I didn’t eat, and Israeli pickles (that I also didn’t eat). I stuffed a pita with some shawarma and hummus and had a nice little wrap. Up until that moment, I had never had hummus, despite being involved in dance for several years. It was different, but it wasn’t bad.

I decided to pick up a tub of garlic hummus and looked up a ton of chickpea recipes on Pinterest. I’ve yet to try any of them, but I have a few cans of chickpeas in my cabinet. I’m not sure how I ended up on shawarma recipes, but that was my project this week.

I sort of used this recipe from Jo Cooks, although, I was only cooking for me, so 3 chicken breasts was way more than I needed for myself. So I had to reduce the recipe. I’m more of an eyeballer than a precise cook, so I reduced, but not by 2/3 exactly. I also ditched the onion, because onions make me ill, and the parsley because I didn’t have any.

These are the rough measurements I ended up using.

I marinated my chicken for 24 hours. I didn’t initially intend to do that, but I went out with family the day I planned to cook it, so it got shelved for a day. I mixed all my spices and liquids together and coated the chicken breast and put a lid on the bowl and popped it in the fridge. I flipped it over after several hours, before I went to work, so the other side got some love too.

When I was ready to cook, I put the chicken in a smallish Pyrex baking dish and baked it for 45 minutes at 425 F (218 C). I flipped the oven over to broil and left the chicken in there while I toasted a pita bread brushed with olive oil. I took the chicken out and let it sit for 5 minutes before slicing it up.

I spread a layer of garlic hummus on the pita and sprinkled some hemp seeds on it for some extra texture. I added the chicken and a sprinkle of reduced fat feta cheese and had a tasty chicken shawarma wrap.

I also tried to make turmeric rice, but that was a bit of a disaster, so we aren’t going to talk about that.

My first attempt at Middle Eastern (inspired?) food was a success. Next time I might even try making my own flat bread or even my own hummus. I’ll definitely use a less tangy hummus next time. 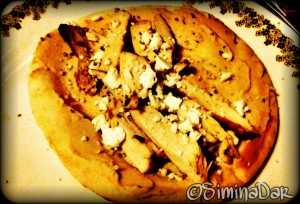 View all posts by Simina Dar